A UFO Message or 3-D Crops? 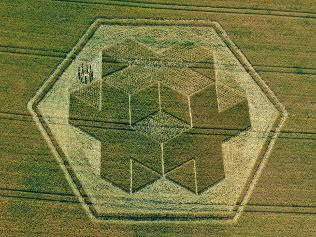 Image at left - An amazing four dimensional crop circle has appeared in field of wheat at Clay Hill, Warminster, Wiltshire.

The site, made famous by UFO sightings in the 60's and 70's has gotten crop circle experts baffled over the 200 foot design.

PERHAPS it was a close encounter of the 3-D kind - this sophisticated crop circle uses an optical illusion to give the impression of a three-dimensional cube.

The creators of the 70m-wide design in a field of wheat outside London remain a mystery.

The area is known as the UFO capital of Britain after repeated sightings of flying saucers and numerous crop circle appearances over the past few decades.

However, those hoping that the mysterious circle is a message are likely to be disappointed.

Over a decade ago pranksters Doug Bower and Dave Chorley admitted to creating 200 crop circles around Warminster.