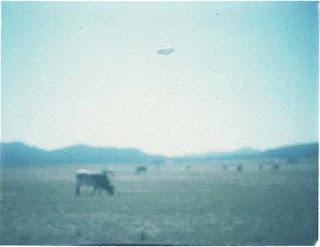 October 6, 2009
A UFO streaks through the sky in this astonishing video of the Iranians test firing a controversial missile. The mystery object zooms unseen through Iran's airspace — before splitting a cloud in two as the film focuses in on the soaring rocket.

A UFO expert today described the unknown craft, which appears to be tracking the weapon, as "phenomenal".

A US report on Fox News revealed the UFO in footage of the second launch. The video shows the Shahab-3 rocket soaring into the sky. But after 38 seconds a nearby cloud is mysteriously torn in two by a flying object traveling at unaccountable speeds.

Nick Pope, a respected former UFO analyst for the Ministry of Defense, examined the remarkable footage. He hinted that whatever ripped through the cloud was not man-made.

Pope said: "One theory is that it's a secret American drone. At any time there are prototype aircraft and drones being operated that won't be shown in public for years. Stealth aircraft flew for many years before their existence was acknowledged. But the speed and acceleration seems phenomenal. I'm not convinced we've got anything capable of such maneuvers."