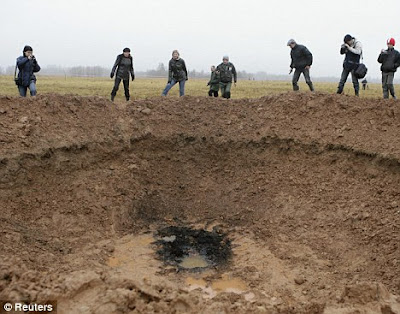 A fiery object struck farmland creating a large crater near a small town in northern Latvia.

No-one was injured in the incident and geologists are now studying the object, which may be a meteorite.

Locals claimed the object fell near a farmhouse on the outskirts of Mazsalaca town in the district of Valmiera last night.It created a crater which measured 50 feet across and 16 feet deep.

A witness who claimed to have seen the incident described the 'meteorite' as making a noise similar to the one of an aircraft flying at a low altitude.

ldis Nulle, a scientist at the Latvian Environment, Geology and Meteorology Center, said there was smoke coming out of the crater when he arrived at the crash site late Sunday in the Mazsalaca region near the Estonian border.

'My first impression is that, yes, it was a meteorite,' he said. 'All the evidence suggests this when compared to pictures of real meteorite craters.'He said the rim of the crater was slightly raised and there was a black-grayish scar at the bottom - both signs of a meteorite impact.

Experts outside Latvia said it was unusual for such a large meteorite to hit the Earth. The planet is constantly bombarded with objects from outer space, but most burn up in the atmosphere and never reach the surface.

Asta Pellinen-Wannberg, a meteorite expert at the Swedish Institute of Space Research, said she didn't know the details of the Latvian incident, but that a rock would have to be at least three feet (one metre) in diameter to create a hole that size.

Henning Haack, a lecturer at Copenhagen University's Geological Museum said more information was needed to confirm that the crater was indeed caused by a meteorite.

'With all these kind of reports we get there always is a pretty large margin of error,' he said.

In Latvia, Nulle said a group of experts would examine the crater today and bring rock samples back to the capital, Riga, for testing.

Nulle rushed to the site after people in the area reported seeing a fiery object falling from the sky.

Inga Vetere of the Fire and Rescue Service said a military unit has tested the site and found that radiation levels are normal. There were no injures.

She said police have cordoned off the area to prevent souvenir hunters from taking away the soil.

'We are not finally sure that this is a meteorite,' she told Itar-Tass news agency. 'Eyewitnesses said something fell from the sky and fire started.'

Russian blogs posted YouTube video that claimed to show the remains of the meteor burning brightly shortly after the crash, but the validity of the video has not yet been confirmed.